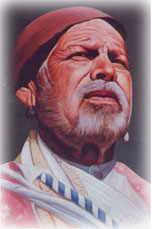 Most of the lower class people in villages were uneducated and poor. They worshipped khsudra gods like Maraai and Shitala Devi. Lambs, hens were sacrificed to keep the Gods happy, to cure a disease or for a good crop. Debuji was born in such society. Though uneducated, he fought against animal sacrifice and untouchability. He taught the importance of cleanliness and hygiene through practice. He built numerous dharmashalas, Gorakshan centers, food donation centers for handicapped and old homes all over Maharashtra. Debuji was the only child of Zingraji and Sakhubai. After the death of Zingraji he and his mother went to live with his maternal uncle. Within years he became an excellent farmer, herdsman, singer and swimmer. He was married to Kuntabai and had four children. A lover of animals, he opposed animal sacrifice since childhood. Even when his friends, relatives and the people of his caste forced him to sacrifice animals, he preferred to face their anger rather than kill the animals.

Debuji was a very courageous man. Once a Saukar came with his guards to take hold of Debuji’s farm. Despite the fear expressed by his family and the villagers he single handedly fought them all. Fed up with the material world, one day he left his home. He kept wandering from village to village. He worked for alms. Took up cleaning villages. He also started building Ghats on the river Purna. Slowly people started joining him in his cleaning activity. He preached the villagers on the importance of hygiene. He found many followers. Among them were people like Dr. B R Ambedkar, Acharya Atre. Money started pouring in the form of donations. This was used for building activities. Realizing the plight of Harijans, he built a dharmashala for them in Pandharpur, Nasik, Pune, Alandi and Dehu. To stop the slaughter of cows he built a Gorakhan center in Vidarbha. He started food donation centers for the handicapped, and poor. He built homes for the old who had no place to go. He also worked for the upliftment of the people suffering from leprosy. 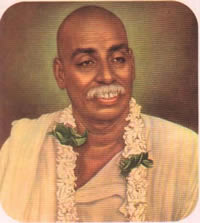 “You have not made up your mind to give up your ego, and you want that God should bless you, why ? Do you think God is like vegetables available in any market.” This is one of the most popular bhajans (holy song) of Great saint Tukdoji Maharaj. The name of this great man was Manik and father’s name Namdeo. He was born (1909) in Ingle family (surname). His father was a very poor tailor. He was never interested in taking the education, instead he would like to sit with the people in temples and sing the songs. He learned the art of playing “khanjiri” (an instrument of about 6 inches diameter with the diaphragm of thin animal skin, played by one of the palms and held in other). Manik accepted the great saint of Varkhed Shri Adkoji Maharaj as his Guru. Manik would amuse the people by singing his own instant compositions on the rhythm of khanjiri. After a few years, Manik left the home and stayed in different dense forests for years to gather in search of the eternal knowledge. (Atmadnyan). After enlightenment he came back to public life. He came extremely popular due to his “easy to sing” kind of bhajans for the villagers.

Mahatma Gandhi used to call him for meeting and he would like his bhajans very much. Manik was named as “Tukdoji” by his Guru, the name which he very much like. Tukdoji Maharaj entered the independence movement at that time and instigated people to participate in the struggle for independence. He wrote the bhajans of patriotic meaning, that created awakening in the villagers. He wrote the volumes of “Gramgita” a book that became bible for the villagers. Rashtrasant Tukdoji maharaj participated in the Vishwadharma Parishad (International convention of religions) held in Japan in 1955 and received the applauding. He would help the people in distress at the time of national calamities. Tukdoji was a noble self realised saint. His early life was full of Sadhana both spiritual and yogic exercises. He spent much of his early life in the deep jungles of Ramtek, Salburdi, Ramdhighi and Gondoda. Even though he was formally not much educated, his metaphysical spirit and potentiality was of very high order. His devotional songs permeate full spirit of devotion and moral values. His Khanjedi, a traditonal musical instrument was unique and his style of playing it was unparalled. He was bachelor, however, his life was dedicated for the services of the masses irrespective of caste, class, creed or religion. He was all the while absorbed in spiritual pursuits. He critically observed the nature of the people and channelised them for the cause of their upliftment. He had self realised vision and through out his life, taught the lessons for the purity of hearts and malice for none.

In early life, he used to sing the devotional songs, however, with the passage of time, he impressed the masses that God is not only in Temples, Churches or Masjids, he is everywhere. His powers have no limits. He advised his followers to follow the path of self realisation. He firmly opposed the priesthood and propagated the eternal values and universal truth. Tukdoji stressed much on the congregational prayer wherein all the people irrespective of their religion, could participate. His prayer system is really unique and matchless in the world. He claimed that his congregational prayer system could be bound to bind the masses in the chain of brotherhood and love. Rashtrasant Tukdoji used to work in person with the villagers in road construction, village-sanitation and other activities. His writings both prose and poetry are full of devotion and the spirit of humanity. His nobility was of very high order. His selfless devotion and dedication are .bound to teach the lessons for the generations to come. Tukdoji is a shining star in the tradition of the saints of our great India..

Jijamata, (Rajmata Jijau) was born on 12 January in 1598, at Sindhkhedra in Buldhana district. Rajmata Jijau was the Matoshree of Chhatrapati Shivaji Maharaj, the founder of the Hinduvi empire.Today this place is not only a historical place but also a tourist destination. Jijau Maa Saheb was born on 12 January 1598 in the Bhuikot palace. The Rajwada, which has an impressive grand entrance, is situated near the Mumbai-Nagpur highway in Sindhkhed Raja. There is also a garden built in the same area of municipality. Here is the place of worship of Lakhujirao Jadhav. This magnificent thing is bigger than the whole Hindu Rashtra Samadhi of India. The place where Jijau played the color is the palace of the palace. In this Mahal, the marriage of ShahajiRaje and Jijau was discussed..